I used to be into metal detecting years ago like a few people. After watching the BBC series Detectorists again plus Stu sending me links I thought I’d have a go at making one.
The Surf PI is an electronics kit you can buy from Silverdog
It’s designed for beaches hence the Surf bit and it’s a Pulse Induction detector, PI.
The Web has a few sites already documenting the build so I’m not going to do that.
http://www.adrianandgenese.com/
http://www.metaldetectingforum.co.uk Then there’s a crutch from the recycling centre, PSU box from a Dell PC and a vacuum forming machine, down the rabbit hole we go (thanks Stu).

Coil
The coil in the Surf PI is used as a transmitter and receiver.
The circuit looks for differences in the pulses (echoes) it sends out and gets excited when it does, look here if interested http://electronics.howstuffworks.com/gadgets/other-gadgets/metal-detector4.htm The induction characteristics of this coil need to be around 300uH (lots of little Henries) and I didn’t have any way to measure this. Having an oscilloscope I went off down the route of using a function generator and built a kit from Maplin.
Then found it was crap and only good for audio frequencies.
I didn’t like the look of this scary formula L= 1/(2пFr)^2.C. [uH] anyway so bought an Induction Meter. After a few different types I settled on my multi Stonehenge design with 24AWG enamelled copper, it made a small narrow coil that seemed to work fine. Vacuum Forming
I’ve fancied one of these machines for ages, you can’t look around anywhere without seeing some plastic that’s been formed in this way.
Stu made the Big Sucker V1 and I tweaked it a bit.

Again off down another hole; I made a secondary vacuum source from a broken dehumidifier compressor motor and my small air compressor (now also broke). Although this worked I opted to add another vacuum cleaner instead because I like spending hours on making things that don’t always work… The forms were from two layers of 9mm MDF and lightly sanded on the sharp edges. Yes, I know it looks like an advert for the Campaign for Nuclear Disarmament, but it’s NOT (Atoms for Energy OK). The heat source was a cheap halogen heater. I made the cover to distribute the heat evenly over the ABS plastic, heater being A4 size and plastic A3. Kitchen foil on the inside and it’s cold to touch when on. A few tests with other plastics didn’t go well but I found a use for that temp gauge I bought. The box for the electrics was a Dell external power supply. Lasered the holes for audio socket, charge socket, voltmeter, volume and sensitivity controls plus a push button for the voltmeter display. It’s using a Lipo battery pack so don’t want the voltage going too low.

The ABS plastic I bought is great, like liquid rubber with the right temperature, result!! The coil fits snug in there and I added a 6mm ply former to take up some space and MDF inserts for the bracket, filled with fibreglass resin then some black gasket In the gaps to finish it off. Spraying the crutches black didn’t work so used a couple strips of PVC heat shrink to cover them, looks better and adds some protection. Used grommets where I could. Fitted it altogether in the PSU box, tuned it in and adjusted some other settings, gold rings at about 250mm.

Already working on the second version coil housing, less CND more roundness.
From 3mm Pinseal ABS it’s a lot stronger, filled with resin and squeezed together until it’s just about to ooze out. Camo cycle handle bar tape finishes it off.
The total weight is 1.3Kg but feels a lot lighter when using it. 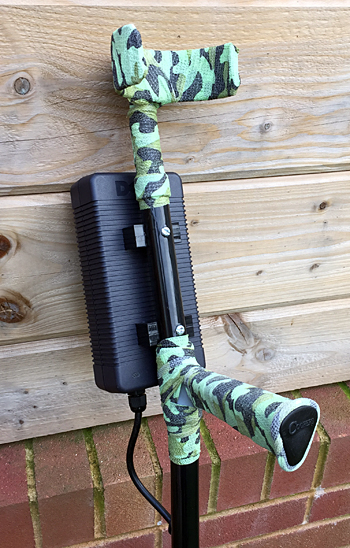